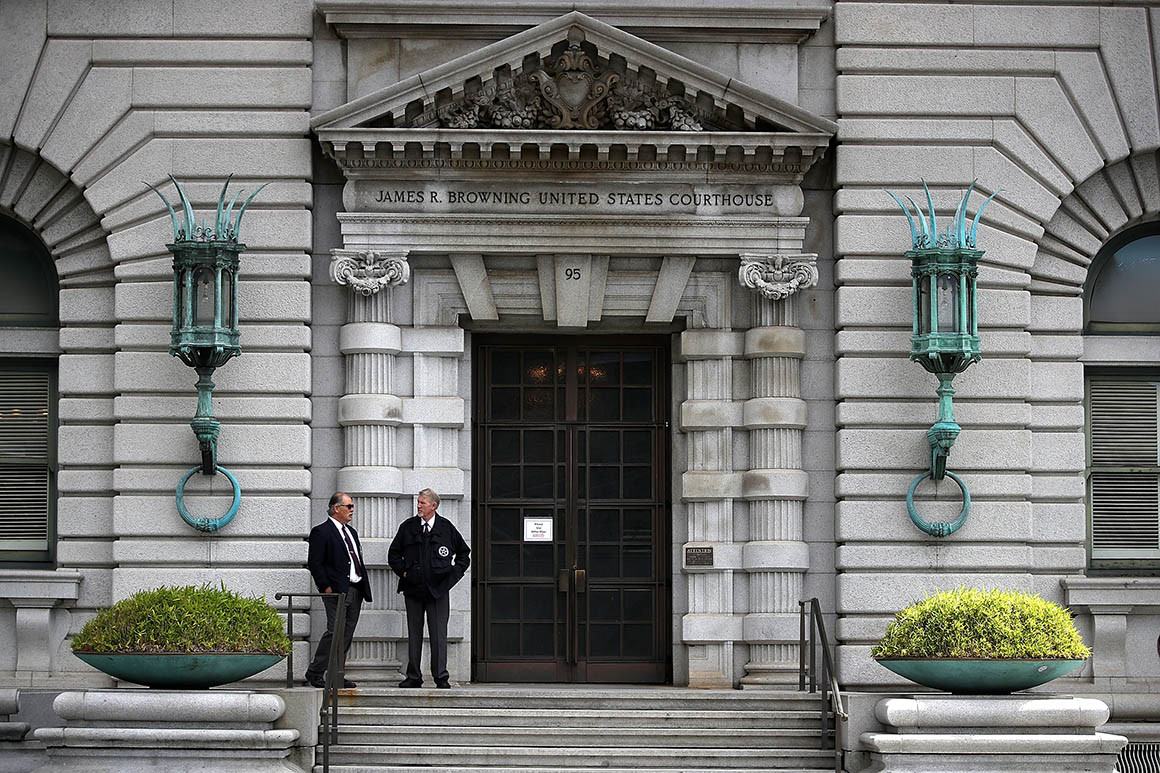 ​Outside conservative groups say the changing 9th U.S. Circuit Court of Appeals will reduce the odds of liberal foes of the president filing challenges with like-minded activist judges eager to freeze his agenda. | Justin Sullivan/Getty Images

​A bastion of liberalism in the federal judiciary is slowly turning rightward, threatening Democratic court challenges on everything from abortion to who gets a green card.

The Senate confirmation of Lawrence VanDyke and Patrick Bumatay to the 9th U.S. Circuit Court. This month marks nine appointments by President Donald Trump to the 29-member bench that serves as the last stop for nearly all legal complaints lodged in nine Western states. Democratic-appointed judges now hold a three-seat majority, compared with 11 at the start of Trump’s presidency.

If the trend continues, it represents a major shift in the liberal wing of the judiciary, meaning lawsuits for progressive causes won’t find a friendly ear as easily as they have. The circuit has been the go-to venue for activist state attorneys eager to freeze Trump policies on health care, immigration and other social issues. It ruled against Trump’s weakening of Obamacare’s contraceptive mandate, as well as multiple versions of his travel ban.

It’s now weighing the administration’s overhaul of the federal family planning program, the "public charge" rule that denies green cards for individuals who participate in programs like Medicaid — and it could take up the "conscience rule" allowing health providers to opt out of providing care on religious or moral grounds. With Congress largely gridlocked, the rules often are the only way to change policies, even if they’re often challenged in court. And transforming the judiciary to make it more sympathetic to such an agenda could be one of the enduring victories of Trump and Senate Majority Leader Mitch McConnell that will far outlast their time in office.

Trump has called the 9th Circuit “a complete and total disaster" and a "big thorn in our side," and some congressional Republicans still threaten to break up its jurisdiction. But its changing ideological makeup could wind up giving states like California less legal elbow room to challenge Trump policies and go their own way in areas like reproductive rights and LGBTQ issues.

“The 9th Circuit is a very important circuit, and the presence of more conservative judges puts in peril all of American health care reform," said Sen. Richard Blumenthal (D-Conn.), himself a former state attorney general.

With California Attorney General Xavier Becerra’s penchant for challenging Trump’s agenda, the 9th Circuit’s caseload of liberal causes isn’t likely to shrink, said Chris Kang of the liberal group Demand Justice, who oversaw the selection and vetting of judicial nominees in the Obama White House. But the calculus could change.

​ “The 9th Circuit is a very important circuit, and the presence of more conservative judges puts in peril all of American health care reform.”

"Republicans politicize the judiciary so they can accomplish policy goals that they wouldn’t be able to do through the democratically elected branches of government," he said.

The 9th Circuit isn’t the only court whose makeup has changed through Trump’s conservative nominees and McConnell’s singular focus on confirming judges. The 2nd Circuit in New York and 3rd Circuit in Philadelphia now have Republican-appointed majorities. But the 9th Circuit has importance as the biggest circuit in the country and a jurisdiction with more than 60 million people.

The court already has issued some rulings favorable to Trump’s agenda.

A 9th Circuit panel of four Democratic appointees and seven Republican appointees in July allowed the administration’s overhaul of the Title X federal family planning program to take effect. The policy bars clinics that provide or refer patients for abortions from receiving program funds for reproductive health services like STD screenings and contraception and prompted Planned Parenthood to quit over the change. Another 9th Circuit panel this year ruled in favor of letting Trump’s Justice Department distribute grants to cities that use the money to crack down on illegal immigration.

Outside conservative groups say the changing court will reduce the odds of liberal foes of the president filing challenges with like-minded activist judges eager to freeze his agenda.

"Forum shopping will be less attractive now that you have a basically balanced bench as far as Republican or Democratic nominees," said Katie Glenn, government affairs counsel for Americans United for Life, which focuses on litigation and legislation for the anti-abortion movement.

Daniel Goldberg, legal director of the liberal judicial advocacy group Alliance for Justice, stressed that beyond the numbers, Trump has appointed nominees with strong ideological views. That was the case with VanDyke, who was confirmed in a 51-44 vote on Dec. 11 after drawing criticism for past writings and opinions on same-sex marriage, abortion, labor and immigration.

The court’s new lineup could quickly weigh in on more high-profile cases.

The Trump administration will likely seek a reversal of two separate lower court injunctions against the health provider conscience rule and has been asked by DOJ to freeze a recent nationwide hold on Trump’s order to deny legal immigrants entry to the U.S. if they can’t cover their health care costs.

The changing composition of circuits like the 9th may ultimately galvanize liberals to push an aggressive judicial agenda of their own, further polarizing the courts.

"The asymmetry [in temperament] is what causes the problem," said Jon Michaels, a UCLA law professor. "We have a quite forceful right flank, buttressed by a left flank that prizes judicial humility and judicial modesty. As progressives think about what the public interest should be, it’s not just winning the next court battle, but it’s about what their representatives should think about in reshaping the judiciary when they’re in the majority."

Kang’s take is that Democrats should adopt the GOP’s strategy when they next control the Senate and executive branch: Nominate more ideological judges and then add seats to the court.

The next Democratic president, he said, "will need to write a new playbook."