Who Needs So-Called "Small" Cells on Utility Poles in front of houses? NO ONE . . . because 4G AND 5G antennas can be installed on Macro Towers, Just like the one shown below and the other one in the Verizon Marketing video that follows . . . 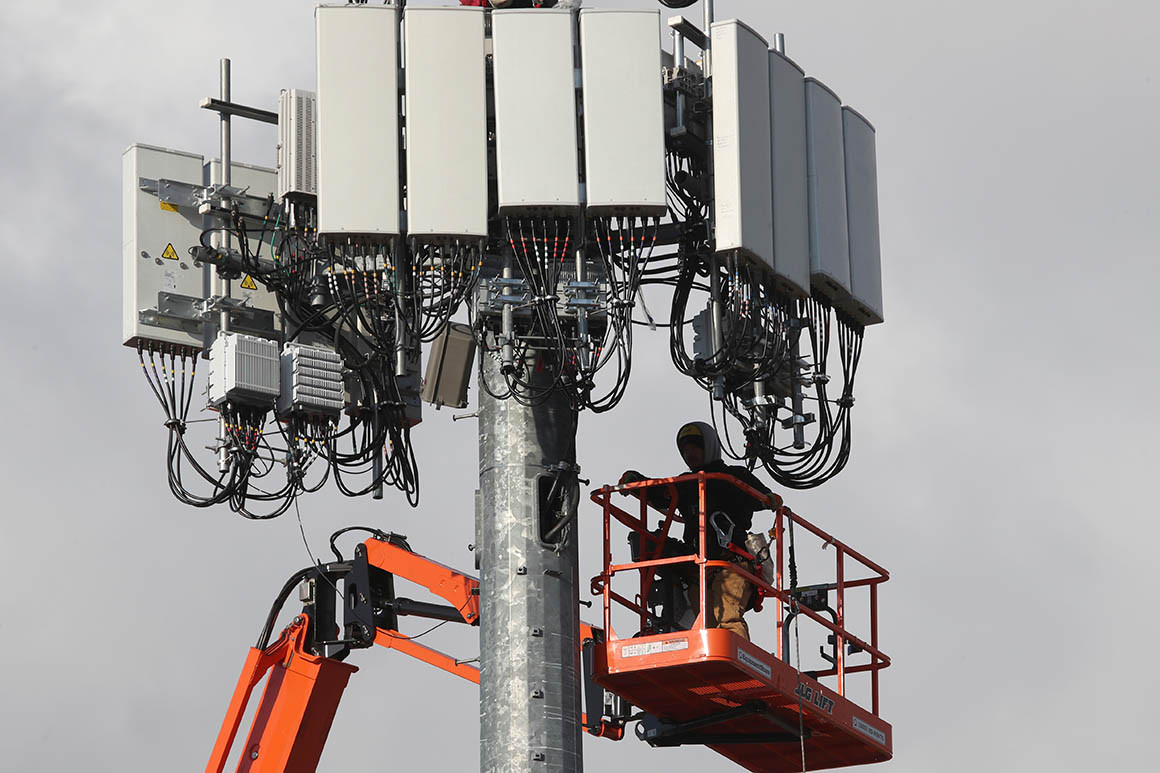 A worker rebuilds a cellular tower with 5G equipment for the Verizon network in Utah in November. | George Frey/Getty Images

Verizon Can Install 4G AND 5G on Existing Macro Towers

President Donald Trump envisions a not-too-distant future in which super-fast 5G networks span the country, powering everything from smart cities to remote surgeries — and getting there before China does. There’s just one thing: He doesn’t have the workforce to build it. And he’s not even close. The 27,000 tower hands working nationwide right now won’t be able to handle the workload,

“We’re talking about the ability to double the existing workforce.”

These next-generation wireless networks, made up of thousands of tightly clustered cell sites, are already coming online in a smattering of U.S. cities such as Minneapolis, MN and Sacramento, CA. They’re roughly 100 times faster than current networks and predicted to radically reshape the global economy, ushering in a new era of connected devices, allegedly supporting driverless cars and enhanced telemedicine, though there is no evidence that 5G Wireless is needed for either. Is this just spin?

As Trump tries to edge out Beijing in the race to 5G, the U.S. is facing a shortage of not just tower climbers, but many other workers skilled enough to roll out the infrastructure on behalf of wireless giants like AT&T, Verizon and T-Mobile, upping pressure on the administration given the economic promise of this new technology.

But the low unemployment rate that Trump loves to tout could actually slow the rollout of 5G. The broader network-building process, which includes laying fiber, climbing cell towers and placing hundreds of thousands of smaller pieces of infrastructure known as small cells, could call for as many as 100,000 new jobs to fill, FCC Commissioner Carr estimates.

The wireless industry has suggested a need to build some 800,000 5G small cells by 2026. The public has no desire for any of these new cell towers. There is one true statement in the field of 5G propaganda:

No one — and I mean no one — wants a cell tower in front of their home.

In some ways, a labor shortage will serve the needs of many Americans who strongly oppose this top-down program to streamline the build out of an unwanted and unneeded wireless infrastructure. Fiber directly to homes is what is needed but Wireless everywhere is not.

Despite this fundamental market weakness that no one — and I mean no one — wants a cell tower in front of their home, apprenticeship efforts, in-house training and academic and technical training partnerships are underway, some industry officials caution that won’t be anywhere near enough to meet demand in the short term.

“It’s almost a crisis. Because if it’s not a crisis today it will be by tomorrow if we don’t act now. You can’t just invent a new workforce overnight . . . The lack of a properly skilled workforce is a top obstacle we’re facing right now to winning the race to 5G.”

Is there really a race to 5G, or is this just spin, again?

The total price tag to train the 5G workforce is unknown, although current investments seem modest. A Department of Labor grant to kick-start even one statewide apprentice program in North Carolina cost $2.3 million.

Meanwhile, China is spending hundreds of billions of dollars to expand 5G and has “undertaken significant investments to bujld up a more robust digital infrastructure of fiber optic networks that are important to facilitate the large-scale deployment of 5G,” according to a November report from the Center for a New American Security.
Adelstein continued:

“China can much more quickly redeploy labor. They have much cheaper labor and much more readily available labor than we do. So if they make it a national priority, they can use state instruments to quickly ramp up and clear blockages to broadband.”

Adam Segal, director of the Digital and Cyberspace Policy Program at the Council on Foreign Relations said that there is

"no doubt that Beijing has made 5G a national priority, and the pace of infrastructure build out on 5G has been impressive,” especially compared to U.S. build-outs, said .

But Chinese telecom companies have closely cooperated with local governments to make this happen, Segal added, questioning the idea of the government “dragooning” people into service. China may also face some of the same shortages of skilled workers as the U.S., according to Segal, who noted that China faces some shortages in other tech areas such as artificial intelligence and cybersecurity.

Western policymakers have warned that if China wins the race to fully deploy next-generation wireless technology nationwide, it would have first-mover advantage to exert influence over the broader global 5G industry. Wow, even more spin . . . will it ever end?

Beware of the Chinese? How About Beware of Surveillance by Any Entity . . .

The US Government, local Police Departments and may technology companies are happy to surveil the population for economic gain and control — not unlike the Chinese.
The U.S., in a somewhat hypocritical, protectionist retaliation, has sought to blunt the spread of Chinese 5G technology, waging a campaign at home and across Europe to block the use of components from Chinese Telecom companies Huawei and ZTE. American lawmakers, military officials and China hawks warn those companies pose security risks, claiming Beijing could manipulate the equipment and use it against Americans. The military has already banned the use of the equipment and the Commerce Department is weighing rules for a much broader nationwide ban.

The cost of the U.S.’s build-out of 5G will likely be higher without access to inexpensive Huawei components, adding to the workforce challenges. We should all be asking if these costs are even worth it.

It’s unclear if the 5G workforce shortage is even on the White House’s radar. Last spring, Trump said he sided against “leading through the government” on 5G in favor of a “private sector-driven and private sector-led” approach, spurning some advisers including Newt Gingrich. Trump, meanwhile, caught many off guard in November when he suggested that Apple, a tech giant that doesn’t build telecommunications networks, take up the task. “I asked Tim Cook to see if he could get Apple involved in building 5G in the U.S.,” Trump tweeted. “They have it all – Money, Technology, Vision & Cook!!”

Still, many telecommunication companies are looking to the Trump administration for guidance on how to build a next-generation network without access to Chinese parts and few skilled American workers, especially as federal legislation that would help spur 5G workforce training has stalled.

“There’s no question that in 2020 there will generally be a shortage of workers to do this work, and more demand for faster deployment than the industry has the capacity to provide,” said Josh Broder, CEO of Maine-based network construction firm Tilson, a 600-person company that’s hiring for about 100 open positions, even with 80 apprentices in training now.

“This year we’ve turned away as much work as we’ve performed,” he added. The federal government could “provide some sort of broader, more uniform federal support for workforce reskilling,” relieving the burden from companies such as his, Broder said.

“While I appreciate the Department of Labor’s commitment to developing a skilled workforce, I would like to see a concerted effort from the Dept. of Labor to ensure we have the workforce necessary to build up 5G, especially as we are racing other countries like China."

The current Telecommunications Industry Registered Apprenticeship Program counts more than 2,000 apprentices enrolled so far across 28 participating employers, according to the Wireless Infrastructure Association. The group touts that 94 percent of these apprentices remain with the employer upon completion.

Despite the broader 5G worker shortfall, Carr says there is a spike in build-out projects, partly due to the administration’s attempts to streamline infrastructure rules. Carr estimates that about 200,000 small cells will be in place by the end of 2019.

“When you have central planners in Beijing directing construction projects, they can’t match supply and demand,” Carr told POLITICO. “I believe in the American free-market, free-enterprise system.”